Investigation reveals the devastating effects of the lack of paid family leave: Data show nearly 1 in 4 employed mothers return to work within two weeks of childbirth. 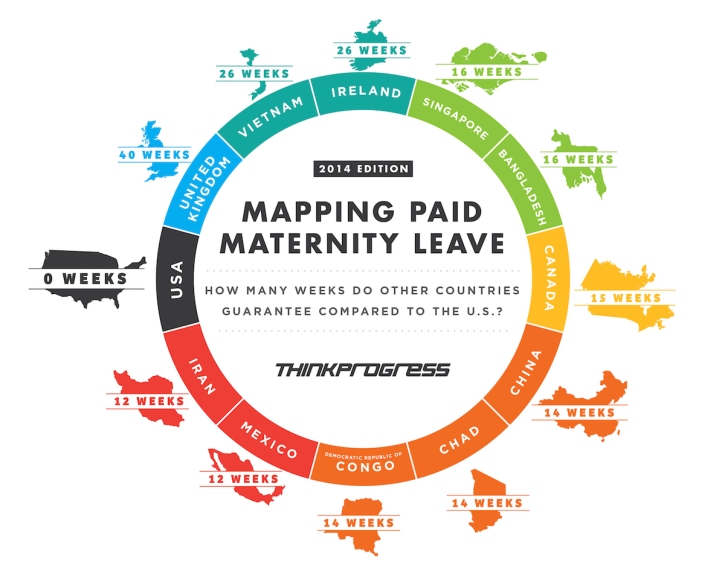 Leigh Benrahou began laying plans to have a second child almost as soon as she had her first, a daughter named Johara, in 2011. Benrahou, 32, wanted to time the next birth so that when she returned to work, her mother, who works at an elementary school and has summers off, could babysit. Most importantly, Benrahou wanted to spend as much time as she could with her new baby while also keeping her relatively new job as the registrar at a small college.

While her husband, Rachid, 38, earns enough at a carpet cleaning company to cover their mortgage and food, without her paycheck they’d be forced to live close to the bone. And if she quit her job, Benrahou, who has a masters in nonprofit management, would take a big step backward in what she hoped would be a long career in higher education.

So Benrahou, who has wavy dark blond hair, blue eyes and a tendency to smile even through difficult moments, set about what may be the least romantic aspect of family planning in the United States: figuring out how to maximize time with a newborn while staying solvent, employed and, ideally, sane.

Most people are aware that Americans have a raw deal when it comes to maternity leave. Perhaps they’ve heard about Sweden, with its drool-inducing 16 months of paid parental leave, or Finland, where, after about 9 months of paid leave, the mother or father can take—or split—additional paid “child care leave” until the child’s third birthday.

But most Americans don’t realize quite how out of step we are. It’s not just wealthy, social democratic Nordic countries that make us look bad. With the exception of a few small countries like Papua New Guinea and Suriname, every other nation in the world—rich or poor—now requires paid maternity leave.

Paid parental leave frees mothers and fathers from choosing between their careers and time with their infants. For women, still most often the primary caregivers of young children, this results in higher employment rates, which in turn translates to lower poverty rates among mothers and their children.

Research shows that paid leave can also be a matter of life and death for children. By charting the correlation between death rates and paid leave in 16 European countries, Christopher Ruhm, a professor of public policy and economics at the University of Virginia, found that a 50-week extension in paid leave was associated with a 20 percent dip in infant deaths. (The biggest drop was in deaths of babies between 1 month and 1 year old, though mortality of children between 1 and 5 years also decreased as paid leave went up.)

According to the Bureau of Labor Statistics, only about 13 percent of U.S. workers have access to any form of paid family leave, which includes parental leave and other time off to care for a family member. The highest-paid workers are most likely to have it, according to BLS numbers, with more than 1 in 5 of the top 10 percent of earners getting paid family leave, compared to 1 in 20 in the bottom quartile. Unionized workers are more likely to get benefits than nonunionized workers.

What do the rest of American women do without a law that guarantees this basic support? Some new mothers who don’t get paid leave quit their jobs, which can leave them desperate for income and have serious consequences in terms of work opportunities and lifetime earnings. Others may choose not to have children (though it’s impossible to definitively quantify how the difficulty of integrating work and childbirth factors into those decisions). And some try to stitch together their own paid leaves through accumulated vacation time and personal days, or through independently purchased insurance policies.

Full story: In These Times »

The Washington Work and Family Coalition includes representatives of seniors, women, labor, health professionals, children’s advocates, faith communities, low income workers, employers, non-profits and other organizations. We’re working together to make it easier for parents to raise healthy children and care for aging parents; for workers to care for themselves or their partners in the event of a serious illness; and for businesses to offer modern workplace standards that improve productivity and worker health. View more posts